When defense contractor Raytheon decided to sell three buildings on its 175-acre site in Portsmouth, RI and consolidate operations and 1,000 employees into the neighboring Nimitz Building, they knew it was the right time to replace the property’s 30-year-old HVAC system. However, the building’s configuration —a three-section structure, with the mechanical room placed squarely in the middle of the roof — would make swapping out the existing air handling units (AHUs) a serious headache for Raytheon.

Cranes would not be able to be used to laterally remove the old AHUs and replace them with the new HVAC system. The only reasonable way to access the mechanical room was through the building’s 48”W x 84”H x 94”D elevator. And the elevator only had a 2,500-lb. weight limit. Raytheon contacted Trumbull Campbell Associates to come up with a workable design/build solution.

Occupants of the 446,000-s/f Nimitz Building conduct sensitive defense work. Because the roof accommodates a complex radar system as well as an array of other precise communications equipment, the new units had to fit on the existing concrete pads. In order not to disrupt plant operations, the Senior Facilities Engineer insisted on an aggressive schedule; when the last bolt of the existing system came out, the first bolt of the new system had to go in.

The experienced sales engineers at Trumbull Campbell Associates rose to the challenge. First of all, recognizing the difficulty of bringing multiple AHUs to the penthouse through tight corridors and a very small elevator, Trumbull Campbell recommended a series of custom-built ClimateCraft ACCESS™ air handlers to the owner and contractor. To accommodate the aggressive schedule, Trumbull Campbell

confirmed that the manufacturer would be able to stagger unit shipments to arrive “just-in-time.” With their largest components capable of fitting through the 48” x 84” elevator door, the dimensions of the ClimateCraft ACCESS factory-built units not only could be designed to fit the Nimitz Building’s existing space constraints —they could be shipped to the site disassembled on individual pallets, easily transported via the elevator to the penthouse, maneuvered into position, and assembled on site. To further expedite field assembly, the manufacturer stacked each panel on the pallets in a clearly marked, “first-required” configuration. 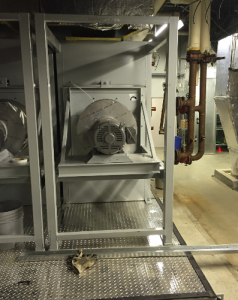 The applied HVAC system includes a series of three 12,000 cmf and one 18,000 cmf AHUs containing innovative fan arrays and housed in highly durable cabinets that are built to prevent sweating at the panel joints. All units were paneled in heavy gauge G90 galvanized steel, using gasket seams in lieu of caulk to provide a true thermal break and mitigate potential leakage. ClimateCraft’s bolted standing seam cabinet construction results in field-directed units that are extremely strong and operationally efficient. To eliminate the high cost of continuously patching up the building’s worn-out AHUs, significantly reduce the time required for scheduled maintenance, and extend the useful

projected life of the equipment, one of the application’s four AHUs was designed as a total Access System (factory-palletized and site-assembled); two were designed as hybrids with a palletized fan section and three demount sections; and the final unit featured four remounts. All units featured the advanced FanMatrix™ direct drive fan arrays. The doors on the fan sections were positioned at the front of the unit, thereby eliminating difficult-to-service side access panels and making it far easier to slide out the fan motors for regular maintenance.

Sign up for updates, insights and news delivered straight to your inbox.